Sakhalin is the biggest island of Far East in Russian borders. The region includes 50 different islands more especially Kurilla Islands, territory of island is 1000 km long from South to the North and 30-200km large from east to the west. Territory is seismic and volcanically active. Most tragic for Sakhalin was 1995, when in the 3.000 town Neftegorsk, 2.000 people died. North part of Sakhalin is poor populated region, but very rich in petrol and gas. In the north started the history of political prison established by tsar and also catholic faith on the island.

Prisoners explored first coal which is unique quality here and need not mines to be exploited, enough excavate. Symbol of Sakhalin is for indigenous burr the holly animal.

Catholic parish on Sakhalin has the beginning in Russian tsar times. First church opened 1897 in old Sakhalin capital Alexandrovsk, the next church was built in private possession of French missionary in Korsakov (Odomari) in 20-ties XX century. Yuzno-Sakhalinsk (Toyohara), new capital of South Sakhalin (Karafuto), got new building in 1932, was built thanks to Cracow Franciscanes Minorites (so called Bernardines). Same time Sakhalin got status of missio sui iuris. The fourth church on Sakhalin was built in 30-ties too in Kholmsk (Maoka) and it is the unique building survived from japanese times. In 1938 the last missionary people were dismissed to Poland, Japan or China. Apostolic Prefect Felix Herman died in Poland in 1956, churches in Korsakov and in Yuzno changed as public use houses as Hospital or library. New users did not care, because these buildings were symbols of japans times, so new owners of Karafuto (Russians) easily destroyed such history in last 60-ties. Church in Alexandrovsk survived as Movie theater “Mayak” until 70-ties.

People were keeping in their hearts faith and memory about missionaries. Wish to have church back was restored by young missionaries from Korea: fr. Jacob Kim Won Sul, fr.Alfonso, fr. Laurencio. They have built small rectory with a chapel in the most far away part of the Yuzno city, because just there survived Korean minority. People from the center was transported to the parish by car each Sunday. A wish of having big church was growing when the number of protestant ministers appeared and they have built many big churches in the center. Also orthodox cathedral was built.

Catholic priests met architect of orthodox church Mr. Minchenko and asked him to make a project of catholic church too. Unfortunately local authorities refused to give peace of land telling that same place which was possible to give have to belong Japanese Consulate. Another place needed to spend much money moving people to new houses from the old ones which still used on the promised land. The final decision came 3 years later after Koreans priests finished their mission, tired conditions government created. Next priest came also from Korea, he was American Benedict Zweber (Che Bun Do), he was very sick, but very experienced, so he got finances, made project with a help of local foreigners engaged in petrol industry on Sakhalin Shelf. Same architect Minchenko started his job so in the middle 1999 the church was ready to be built.

In summer 1999 sickness of fr.Benedict got strong forms and he returned to USA to hospital st. Teresa s. Bishop Mazur helped finding nice forms, asked to make choir balustrades, tower, which is not American style because they prefer cheep, functional thing but decorative things as tower or choir is very welcomed in Russia. People are very sensitive to hear music and contemplate nice architectural form.

Long absence of fr. Benedict in Hospital, urgent need to control all the process of construction made starting impossible in expected time. In may 2000 fr. Benedict was feeling bit better, he got some stones from Lourdes to put as corner stones. Works on construction started 6-th June 2000. It was last visit of fr. Ben.

18-th of March church was visited by bishop Mazur. He put corner stone and made long talk with fr. Benedict deciding how to make design of the church. Bishop talked again to Architect, Grenada director(constructors) also appeared in local TV. Just that time we got impression such a nice church may be disturbing our adversary from Orthodox church or unbelievers. Other difficulties specific to Sakhalin first of all seismology and isolation. On that island there was no one industry making brick so everything was coming by boat from Khabarovsk. Other material came from Korea. Icons came by plane from Moscow and Irkutsk. Tabernacle came from Poland by train and boat. Crane putting the roof burned. Three days after dedication typhoon destroyed underground of the church putting much water so final starting was much delayed even dedication happened very fast as fr. Ben expected. 19-th August 2001. Nobody believed it may really happen so fast. The name of the church wa Assumption so next Sunday it happened! The catholic youngsters from all the Far East came such date to be present and helpful as volunteers. They was cleaning floors, windows, transporting bunches and chairs. Building was smelling nicely because just painted. Enthusiasm of the nations made miracle. 3 seminarians and young priest from Madrid were caring about liturgy. Deacon and acolyte fro Polish Elblag helped sister Roberta singing. Choir was made from 3 young Japanese Lay Missionaries. Korean sisters and priests take care about flowers according to the ikebana art secrets.

4. The history is moving around

The history of building and dedication was registered by Novosibirsk Catholic TV “Kana”, also two local TV stations. Tower of the church, the roof and the underground were finished only in Christmas time and just that moment we were able to say without a shame that this building is most beautiful in all the island, possibly in all the Far East. One of German missionaries working on Sakhalin 20 years made a book under very significant title “Sakhalin island of loneliness”. Today after 3 years of being here, I may tell you that it is just this way. More than half a million citizen Sakhalin until now has sad feeling of prison. Strange climate, much snow, neighborhood of 4 borders (Japan, Korea, China, USA), never sure which country may pretend or occupant the next, make life not easy here. It is why this beautiful church make such a big contrast with all the history and context, give much joy, so that even unfriendly people come here to make photo and to contemplate architecture as the bishop supposed. Some person called this church spontaneously “church of third millennium”. We hope, that this third millennium will be more joyful for this land and may make more human. Just making this text I am hearing many strange attacks against Catholics, because we still use old (Japanese) title of our Apostolic Prefecture Karafuto. I am writing this text in the day of memory Japanese martyrs Paul Miki and his Friends. I wished to tell something nice about Russia, which “permitted” this Sakhalin miracle, but more justice will be telling, that during all the Christians in soviet Russia was crying and dying from persecutions, just that time during so called “Japanese occupation” dozens of European missionary people came to make foundations to the history I am talking about. It is justice to tell that so called “pagan Japan” was so much tolerant for Sakhalin catholics even giving them own catholic priests and never disturbing them. Best exemple in new times were visits, friendship and donations of bishop Peter Jinushi from Saporro in 1995 and also on dedication ceremony. Until December 2000 Bishop Jinushi was canonical superior of Apostolic Prefecture Karafuto, by coming in 2001 to Sakhalin he officially testified he is still frien and accept bp Mazur as new superior from Russia. It was so nice to see Russian and Japanese bishop on the same altar dedicating Sakhalin church, even Russia and Japan still has no peace treaty, catholic bishops made such friendship rather earlier. We may call this also miracle. The second one, because first visit of bishop Jinushi in 1995 15-th September he made peace with Koreans in presence of bishop from Taegu… diocese. which send first missionaries after soviet regime collapsed. Sakhalin… land of peace?

As you may realize this text was made in the beginning February 2002, four days before proclaiming new dioceses in Russia. Atmosphere was dangerous, something was hanging behind, I was feeling we have to pay some price for such a big pleasure. The title Karafuto was not forbidden, nor forgiven. Sakhalin Catholics were called “fifth column”, I was called “Japanese spy”. Bishop Mazur was blamed because using the title Apostolic Administrator of Karafuto. It was made a part of big discussion to whom belong Kurilla Islands. The Pope John Paul II and all Vatican policy is very friendly to Russia, because pope has Slavic roots, but his good will was interpreted worse way possible. Russia insist too much from him, to be a serve on knees always, same as China, putting political conditions to small humble Vatican State.

Vatican never ignored Russian sovereignty, never occupied Russia, but politicians in Russia now says so. That presence of Vatican structures in Russia may be dangerous. It is why bishop Mazur was dismissed, it is why I am also forbidden to return Sakhalin. It is why I collect save, and create new reports about everything done, everything happen in Russia. I believe Holly Mary in Fatima, may support poor Russian Catholics, in the time they loose so little number of missionary people. I believe same way missionaries may return, even it takes 30 or 300 years. 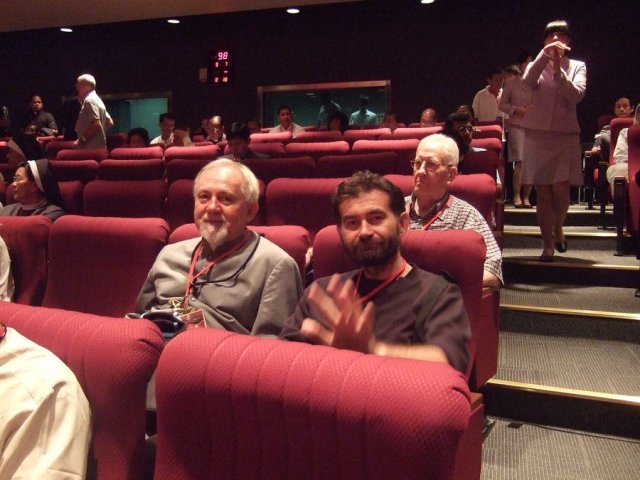